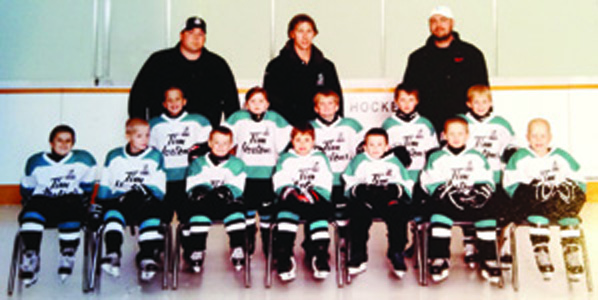 Rural Alberta is home to many kids with a love for hockey — one of Canada’s national claims to fame. Many kids love to tie up their skates and hit the ice on weekends and most parents love minor hockey, as it’s a chance for their kids to live the ParticipACTION mantra and take their eyes off electronic devices, if only for practice or for a game. Minor hockey is vibrant in Lethbridge County, as kids venture out to arenas, don hockey jerseys and learn teamwork.
According to Cindy Widmer, one of the parents involved with the Coaldale Cobras Initiation 1 team, minor hockey is an activity for the whole family.
Cindy’s 6-year-old son Teal’c, who plays for the team, has been playing minor hockey for the past two years. “For us, it was more we thought we’d let him try it because we do want our kids to pick at least one active sport. He tried hockey last year and he loved it,” said Widmer, who is the mother of two children enrolled at St. Joseph’s School in Coaldale.
“The coaches taught him the importance of teamwork and playing on a team, as opposed to me, myself and I,” said Widmer, in regards to the team’s coaches.
For the actual hockey games, Widmer said, she attends all of them.
“I always said I wouldn’t be a hockey mom — and here I am,” she noted.
But how did Widmer get picked to provide game results and be a media contact for the team? “We all have to volunteer at the beginning of the year. I enjoy writing and I’m at the games anyway, so I might as well. I don’t have to keep track of anything — they give me the game sheet and I just write it up from that,” said Widmer.
Initiation teams, Widmer said, is for five and six year olds and runs from fall until March. “The kids are all well behaved and friendly. It’s a really good team.”
Widmer added, the team as a whole, is awesome. “The parents that we have this year — they’re an amazing group of people. The coach is very down to earth with the kids but they’ll listen to him. He’s very firm but I guess more in a loving way. He’s got two boys in hockey. He knows what it’s all about and he’s an amazing coach. He’s taught these kids a lot this year,” said Widmer.
Larissa Gellrich, another hockey mom, is proud of her five-year-old daughter Bridget, who plays for the Picture Butte Initiation 2 team. This is Bridget’s first year playing hockey for the team.
“I think it’s a growing thing for sure. I also have an eight-year-old on the novice team in Picture Butte and just looking at the amount of players that are in the initiation is pretty awesome to have that many kids interested in minor hockey,” said Gellrich.
Gellrich noted she believes getting them into hockey was a good thing at a young age to build on skills, life skills and it builds character.
“Through playing hockey, there’s a lot of lessons to be learned. Just the teamwork, co-operation and the winning and losing,” said Gellrich.
At this point, Gellrich said, minor hockey is just as much fun for the parents.
“To get a little sense of community and you have different kind of hockey friends and family. You kind of look forward to it every year,” she noted.
Gellrich said her family lives in Nobleford and travels to Picture Butte for her kids to hit the ice.
“Going to Picture Butte to play hockey is kind of neat too because it’s a different group of kids that they get to see every hockey season year,” said Gellrich, adding it’s still fun for her kids being part of a team. “That’s what it’s about — is they’re still having fun and they enjoy it and they want to play.”