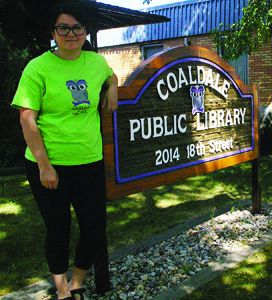 Lee will bike 600 kilometres. No, it isn’t some Proclaimers song. Librarians – get on your bikes and ride. Pardon the Queen reference.
On Sept. 1, the Coaldale Public Library’s Assistant Librarian since January Hannah Lee, will be heading to Norway to participate in the Cycle for Libraries conference.
“It’s just a bunch of librarians coming from all over the world,” said Lee, adding the group will be biking from Oslo, Norway to a location in Denmark. “It’s about 600 kilometres.”
Every day on the journey, Lee noted, the librarians will stop at a different library to pay a visit and discuss issues and trends happening worldwide.
This is the first time Lee has embarked on such a mission.
“I’ve never done a biking tour. I’m kind of nervous but I’m excited and trying to train,” said Lee.
For the event, Lee proposed to the local library board, about doing the cycle tour as a fundraiser.
“I’m trying to gain pledges for each kilometre of the 600 kilometres. We are asking for a $10 donation for every kilometre for pledges and 100 per cent of all of the proceeds that we raise for the bike tour is going to go to the library to enhance our technology. To maybe get new computers or tablets or something that will help out the community,” she explained.
Pledge donations can be made in person at the library in Coaldale or through the “gofundme” account online at http://www.gofundme.com/cycleforcoaldale.
“At the end of the summer we’re probably going to combine it with our summer programs and do an end of the summer barbecue — is what we have planned, and just different incentives here and there.”
For each donation level, Lee added, there are different items up for grabs set up.
For a $10 donation, donors can get their name on a bicycle hanger, which will be placed around the library. For a $20 donation, donors will qualify for a tax receipt issued by the Town of Coaldale. For a $30 donation, donors will receive “I love Coaldale” bumper stickers. A $50 donation will give donors post cards from the trip.
“If you’re generous enough for $100, I think we’re going to have plaques that will be in front of the library,” said Lee.
Lee got involved with the cycling fundraiser through the library’s former head librarian and former Sunny South News columnist Heather Nicholson.
“Heather learned about this through the Alberta Library Conference that happens every year in Jasper. A couple of librarians went and they presented a seminar last year and she thought it was really interesting. She’ll be joining me on the tour. She kind of convinced me to go and I said, why not,” she joked.
According to the first-time cycle tour participant, the two libraries in Lethbridge have also been very supportive of Lee’s upcoming adventure overseas. PLAYCoaldale has also been interested with the physical literacy aspect of the initiative too.
“We’re trying to get as many locals on board as possible,” she said.
Lee said she has always enjoyed travelling but has never been to any of the Scandinavian countries before.
“I’m excited to see Norway, Sweden and Denmark. They’ve never been on my radar before but now I can’t believe I haven’t thought about going after I’ve done some research. It looks like it’s going to be a lot of fun,” she said.
The tour is from Sept. 1 until Sept. 10. But, Lee said she most likely will be out of the country for a total for three weeks. Lee is also taking the trip 100 per cent with her very own funds.
“I’m paying for everything myself and the money just raised goes directly back into the library.”
As for training, Lee said she has been trying to bike whenever she gets a chance.
“I hope by the end of the month I’ll be able to bike out to work, since I live in Lethbridge,” said Lee, joking she is not a natural biker, so this whole experience is new. “I need to toughen up my tush,” she joked.