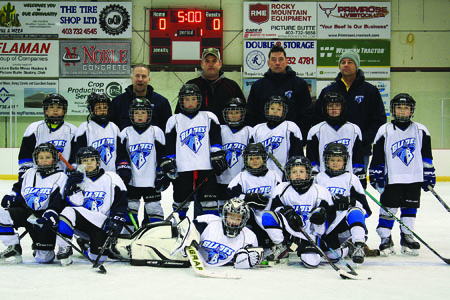 The Picture Butte Novice Blades opened their home tournament on last Friday night with a big 11-3 win over the Lethbridge Novice Hurricanes.
Braxton Hanna scored four for the Blades, Leeland Fraser added three, Luka Rudelich scored two and Riley Van Zeggelaar and Asher Sincennes each added one goal to the big win. Ben Kress had some great saves that night in goal and was named the game MVP. The Blades played game two of the tournament against the Medicine Hat Penguins, where they fell 11-5. Braxton Hanna and Leeland Fraser each scored two and Riley Van Zeggelaar popped in a single goal for the Blades. Braxton Hanna was the game MVP. The Blades played their way into the ‘A’ Consolation final against the Southwest Calgary Cougars last Sunday afternoon. The game was an exciting one with plenty of goals, assists and even a few penalties to make things interesting. The Blades finished the second period in a 6-6 tie, but couldn’t quite find the back of the net enough in the third.
The Blades lost to the Cougars with a final score of 9-7.
Braxton Hanna scored four times for the Blades, Leeland Fraser scored twice and Luka Rudelich scored one goal and also went home as the game MVP.
The Picture Butte Initiation 1 Shimek Service Blades had games against the Raymond Ice this past weekend, winning both games. Friday night in ‘Butte the Blades came out with a 14-2 win.
Scoring for the Blades with three goals were Devin Groenenboom, Tate Serfas, Ryan Serfas and Brody Trotter. Adding singles were Addison Trotter and Jayden Quinn.
Saturday morning the team travelled to Raymond, where they won 17-3. Scoring three goals each were Ryan and Tate Serfas, Devin Groenenboom and Jayden Quinn. Netting two a piece were Luke Serfas and Brody Trotter and netting a single was Addison Trotter. The team travels to Taber next weekend.

The Coaldale Copperheads’ four-game winning streak came to an end on the road this past Friday.
The Snakes struggled getting the bounces against the top north division Thunder falling 7-2. Houghton and Gross were the lone goal scorers.
Back at home on Saturday, the Copperheads changed the tone winning a strong complete game against Okotoks 6-4.
Once again, the team came out in full offensive force taking the lead 3-0 in just three and a half minutes.
Craig Lyon and James Price both had two goals. Singles came from Dustin Houghton and Connor Gross. Dillan Kelly was the net-minder in both games facing 33 shots against Okotoks and 60 against Airdrie.
After the weekend, the Copperheads are sitting in second place in the south. (14-8)
It is tight competition with the top three only a few points apart. (Cochrane 15-4, Copperheads 14-8, Okotoks 13-6)
This coming weekend one home game is set for Saturday at 8:30 p.m. against Banff — sitting fourth in the south.
Just a reminder of the Copperheads’ following weekend home game on the Dec. 12. The team is hosting a fundraiser Christmas Bake Sale — everyone is welcome to participate in baking and purchasing goodies.
The Picture Butte Peewee Blades took to the ice for two games this weekend. The first was an 11-9 win against the Pincher Creek Chinooks.
Caden Heins, Ryan Holm, Nicolas Rudelich, Logan Hillaby, Riley McCloud, Rylan Sincennes, Hunter Vaan Baerenbergh and Ethan Slomp all added points to their season.
The second game was against the Bow Island 03 Rebels. This was the second time the teams battled each other this season.
Picture Butte came out strong but Riley McCloud from Hunter Van Baerenbergh was the only goal the Blades were able to score.
The second period was a battle and neither team could get one between the pipes. The team exhibited great passing and team work. Aidan Perterson did a great job minding the net.
The Blades came out on top with a score of 5-3.
The Picture Butte Atom Masterfeeds Blades were in action this weekend with a home game against the Foremost Flyers.
According to the coaching staff, it was their best effort of the year.
A strong start first period helped them come through with a 10-1 victory.
Riley Hillaby lead the charge with with a three-goal effort. Karsen Haney and Cam Hillaby both added a pair and singles came from Rhett Serfas, Matt Reiter and Leland Gelrich.
The team travels to Duchess next weekend for their first tournament of the year.
Picture Butte Jim Juris Knights of Columbus Initiation 2 came out on top this past weekend against Taber 2.
The kids showed speed, heart and determination — which lead to a great team effort.
The Blades saw Gracen Shooten, Colton VanRootselaar, Issac Medina and Bridget Gellrich with one a piece.
It was two for Walker Schooten and Liam Slomp and a hat trick for Max Okubo.