Lethbridge County hockey hits the ice over the weekend 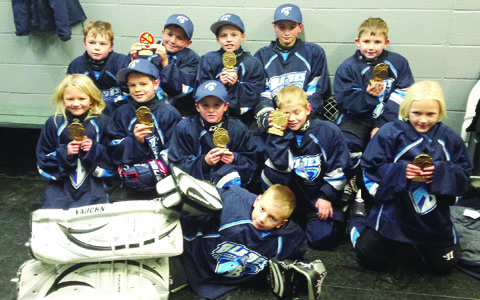 Only one more home game for the Coaldale Copperheads left prior to Christmas. It will be played, not during the team’s regular Saturday home game slot, but at 7 p.m. on Sunday night. Medicine Hat Cubs will be visiting the Coaldale Arena, which is always an enjoyable matchup.
The Snakes, currently after 25 league games, are sitting with a 16-9 record. This includes the team into a race with the top three teams of the south with a maximum of a five-point spread.
With a total of 38 games in the schedule, the Copperheads find themselves with only two more home games in January. This is a reminder for season ticket holders to use tickets for one of these three games, as season tickets will not be valid during playoffs.
This past weekend the Copperheads only played one home game — winning against Banff 5-0.
Rookie goaltender Dylan Swanson earned the shut out stopping twenty shots. Goals were scored by Connor Gross, Dustin Houghton, Austin Huculak, Austin Holmes, and Matthew Johnson.
This past weekend the Picture Butte Novice Blades travelled to Taber for the annual novice tournament.
The Blades faced off against the Bow River Bruins on Saturday morning. The Blades came out flying in the first period with three goals. Braxton Hanna scored two, while Leeland Fraser popped in the third.
Unfortunately, that was the last time the puck found the back of the net for the Blades and the team fell 13 to 3 to the Bruins.
The Digger Award for the game went to Grady McLeod, while Riley Van Zeggelaar took home the game MVP.
Butte’s second game of the day was against the Airdrie Hurricanes. Historically, the Blades have had a bit of a second period slump, but that was not the case in Saturday’s game. The Blades skated hard for all three periods and ended up with a 7-3 win over the Hurricanes. Carson Konynenbelt scored a hat trick. Luka Rudelich popped in two goals, while Braxton Hanna and Leeland Fraser each added a single goal.
Carson Konynenbelt was awarded the Digger Award and Kaden Groenenboom took home the MVP for his outstanding goaltending.
The big win brought the Blades into the B Final on Sunday morning, when the team met up with the hometown hosts, the Taber “R” Oil Kings.
The Blades’ first goal of the game was scored by Ben Kress. This was Ben’s first ever career hockey goal.
Braxton Hanna found the net twice, while Riley Van Zeggelaar, Luka Rudelich and Leeland Fraser scored once each.
Even with a strong push in the third period, the Blades couldn’t quite close the scoring gap and ended up falling 15-6 to the Oil Kings.
The Digger Award went to Tanner Quinn and the MVP of the game was awarded to Braxton Hanna. The Blades travel to Fort Macleod this weekend for another tournament.
The Picture Butte Witdouck Farms Midgets were in Airdrie this past weekend for a tournament.
The team started out on Friday night with a 9-2 win against the home team. On Saturday, the team tied Calgary SVHA Storm 5-5.
Their second game on Saturday had them facing off against the Spartans, which they won 3-2. They finished first in the round robin and being down a few players with injuries and a suspension, the team would once again face the Calgary SVHA in the final on Sunday.
After the second period, the Witdouck Farms Midgets were down 2-0. However, the team fought hard and scored two goals in the third with the final goal being scored with just four seconds left. The game ended in a tie, which was fitting between these two teams.
Points for the weekend were accumulated by Kolten Heins with nine, Landon Veluw with seven, Jared McCloud with five, Jesse Shoemaker and Jackson Liska each with four, Zach Liska and Tristan Heins with three each, and single points from Jazz Wiebe, Phoenix Del Valle, Markus Renning, Nick Grant and Kyle Davies. Nash Ober and Reed Graham shared the goaltending duties on the weekend.
Picture Butte Jim Juris Knights of Columbus Initiation 2 hit the ice against Magrath recently. The kids pulled out a big win seeing Emilio Ramones scoring his first career goal.
Bridget Gellrich added one for the team — also Jesse Klingenberg and Max Okubo had two goals each.
It was three each for Gracen Shooten, Walker Schooten, Berkley Shooten, Liam Slomp and Kale Okubo.