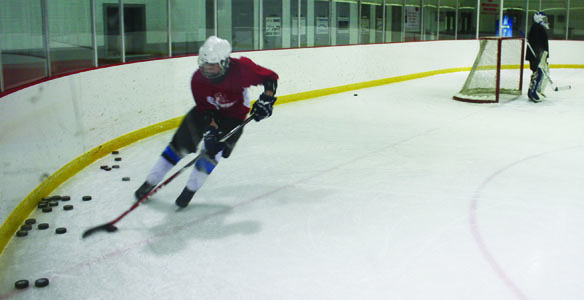 The Coaldale Copperheads are back at home this coming weekend hosting Medicine Hat Saturday at 8:30 p.m. to make up a cancelled late December game.
Fans are reminded only one more home regular scheduled game following Jan. 16 to use game tickets.
This past weekend the Copperheads finished a decent weekend collecting three out of four obtainable points — leaving a close finish for the top south team.
In Red Deer on Saturday night, the team lost in overtime 5-4.
Dillan Kelly played a solid game between the pipes and goal scorers were Clay Spencer, Craig Lyon, Connor Gross, and Brady Parenteau.
On Sunday, the Snakes played against Ponoka with a dominating 7-1 finish.
Brady Parenteau and Ryan Swier each had singles in the game, while doubles each from Craig Lyon and Clay Spencer.
It was a big game for newcomer Mac Karl, scoring his first HJHL career goal.
The Picture Butte Novice Blades hit the ice at home for two games this past weekend starting Saturday morning against the Raymond Ice. The Blades were skating hard and fast but ended up falling 11-4 to the Ice.
Scoring two goals each for the Blades were Leeland Fraser and Braxton Hanna.
Sunday morning, the Blades faced off against the Taber ‘P’ Oil Kings. The Blades played the best game of their season so far, leading the Oil Kings 1-0 into the second period. The Blades stayed close with the Oil Kings and were tied 2-2 half way through the third period. Unfortunately for the Blades, the Oil Kings popped in four quick goals with five minutes left in the game.
The last goal of the game was an open netter after goalie Kaden Groenenboom was pulled to put the extra attacker on the ice.
The score in the game did not reflect the effort and heart the Blades played with, it was great to see such sportsmanship and teamwork on the ice.
Carson Konynenbelt and Braxton Hanna scored one each for the Blades.
The Novice Blades travel to Irvine to meet the Bulldogs on Saturday morning.
The Wilbur Ellis Peewee Blades from Picture Butte headed to Red Cliff for a tournament this weekend, where the team won the ‘C’ final.
The first game was against the Gull Lake Grey Hounds. ‘Butte was down by two early in the game but fought back throughout the first two periods.
At the start of the third period it was anyone’s game. The Blades lit up the ice in the third and ended up winning 10-4 — keeping them on the ‘A’ side of the tournament.
Ethan Slomp was awarded the player of the game.
‘Butte’s second game was against the Bow Island Rebels. Both teams worked hard and the Blades out shot Bow Island 50-26.
In the last one minute of the game, it was 5-4 Rebels and ‘Butte decided to pull the goalie. The tactic didn’t work and the score remained the same.
Tyler Maslan was awarded player of the game.
This dropped ‘Butte down to the ‘C’ final. The team played against the Rockyford Roughnecks.
This fast-paced high-scoring game came out in Picture Butte’s favour 13-7 — making the team champions of the ‘C’ side.
Congratulations to Logan Hillaby for winning player of the game.
The Picture Butte Witdouck Farms Midgets hosted the first-place Bow Island/Foremost Midgets on Saturday and after having a 4-0 lead, midway through the second period, they allowed them to come back for the tie. Points were earned by Jesse Shoemaker with two and singles from Jared McCloud, Tristan Heins, Landon Veluw, Zach Liska, Noah Braun, Nick Grant and Phoenix Del Valle. Reed Graham earned the tie facing 38 shots in net.
Come out and support the Witdouck Farms Midgets this weekend, as they host their home tournament.