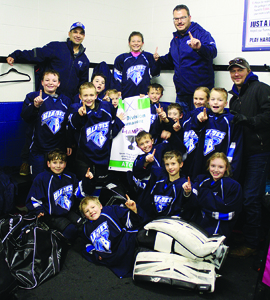 This past Saturday night, the Coaldale Copperheads — in front of a full house of fans — gave everyone an entertaining game of hockey.
Cochrane General, the first place team of the south, was in town to compete against the Snakes.
The Copperheads pulled ahead with spreads of 4-1 and 5-3 throughout the game on the Generals.
With 27 seconds remaining in the third, Cochrane managed to tie the game sending the Copperheads into overtime. Five minutes of four-on-four were played with either team sealing the win.
The game then advanced to a shoot out, taking five players a side in order for the winner to be disclosed.
What an exciting event for fans, but the outcome was not what the Snakes had hoped — losing in the shoot out, earning just one point for an overtime loss.
Defenceman Austin Huculak had a very strong game scoring two goals, Dustin Houghton, Craig Lyon, and Dillon Collett chipped in singles.
Hometown goaltender Dillan Kelly earned the player of the game honours saving 29 of 34 shots.
This past Sunday, the team travelled to Banff taking an additional two points on the weekend with a 3-2 victory over the Bears.
Goal scorers were Brady Parenteau, Clay Spencer, and Connor Gross. Dylan Swanson was between the pipes earning the road win. Pretty decent weekend for the team, earning three for four total points.
This brings the Snakes with two remaining league games left in the season, which will be on the road next weekend.
With a 25-9-2 record, the Copperheads trail Okotoks by two points for second.
Come Feb. 8, it will be short notice to announce who and when the playoffs will be.
If the team finishes third, playoffs will start at the beginning of next week. If second, the team will receive a bye first round.
Fans are reminded tickets will no longer be valid for playoffs.
The Picture Butte Jim Juris Knights of Columbus Initiation 2 team hit the ice with two big wins this weekend.
The team played against Coaldale 1 and Raymond 2. This weekend saw a big goal for Matthew Van Zeggelaar. Two goals a piece for Berkley Schooten, Bridget Gellrich, Isaac Medina, Abraham Gomez Ramos, Colton VanRootselaar, Max Okubo and Kale Okubo.
Liam Slomp added three for the team, while Gracen Schooten and Walker Schooten had five each.
The Picture Butte Witdouck Farms Midget Blades had a busy week of hockey this past week. The Blades had two league games on the weekend, where they won against Warner in Foremost on Friday night 8-4.
On Sunday, the team hosted Taber, where they lost 7-5. Provincial play downs also started this past week, where the team faced off in a two-game series against Fort Macleod. The first game was hosted by the Blades last Tuesday in Picture Butte, where the Blades let a 5-1 lead slip away and ended up winning the game 6-5.
Last Thursday, the team travelled to Fort Macleod, where they skated to a 5-5 tie, which gave the team the series win. Points accumulated from the games came from Landon Veluw with 10, Jared McCloud with seven, Zach Liska had six, Kolten Heins, Jackson Liska added five each, Kaiden Middleton and Tristan Heins each had four, Markus Renning contributed three, CJ Currie, Jesse Shoemaker, Jared Witdouck and Kyle Davies all added two, and single points came from Jazz Wiebe, Russell Woodward, Nick Grant and Noah Braun. Nash Ober and Reed Graham shared goal-tending duties.
The Witdouck Midget Blades now move onto the second series, where they will face off against Lomond. Come out and cheer on the Blades on Thursday at 6:50 p.m. in Picture Butte.
Recently, the Atom Picture Butte Blades won the Spruce View Atom Tournament, going undefeated throughout.
The “A” Final game was against the hometown hosts, the Spruce View Stars.
The game was tied at the end of regulation and went to a five-minute sudden death overtime, where it was still tied.
The game was finally decided in a three-player shootout, with Picture Butte goalie Evan McLeod stopping two of the three shots for the Blades and Riley and Cam Hillaby scoring two of the three shots for the Blades.
Coaldale Cobras Novice 1 took on Brooks this past Saturday. The Cobras played hard losing out 4-2. Goals went to #4 Jarret McNeill and #10 Barrett VanNistelrooy.