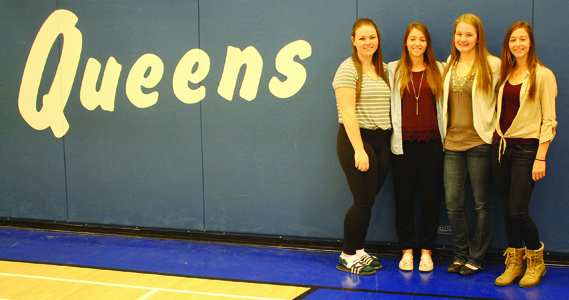 Starting Thursday through this weekend, Picture Butte High School (PBHS) will be hosting 2A Girls Basketball Provincials with the Senior Girls Varsity Queens being the home team.
“There’s a lot of work that goes into running a 2A Girls Provincials. We definitely couldn’t have done it without all the work of our committee. A lot of people have put in a lot of hours to make this event possible. We really cherish the opportunity to bring our community together and experience the event,” said Jon Vande Griend, chair of the tournament.
According to the school’s athletic director, this is the first time PBHS has hosted a girls provincials since 1995.
“We’re really excited to showcase our girls basketball team,” he noted.
One of the exclusive aspects of this year’s provincials tournament, Vande Griend said, is a production company is coming into town to PBHS to present live streaming online of the entire event, similar to last year with the boys tournament.
“We’ve had a lot of donations come in from local sponsors to allow us to be able to have the best quality video available to people watching it online,” he explained, adding streaming the event is something unique and special to offer fans, friends and families of players.
Last year, the live streaming was well received.
“That was probably the number one thing I think people took away from the tournament, in terms of the ‘wow’ factor,” he said.
Vande Griend joked people walked away from the tournament last year feeling like they got the ‘royal’ treatment.
The girls, according to the committee chair, were well coached by Coach Gordon Bramfield and Assistant Coach Joanna Johnson.
“Just looking at the results, they’ve definitely improved throughout the year. They’ve put in a lot of time and they worked hard to be in a position to do very well,” he said.
Picture Butte, Vande Griend said, is a small community, so everybody is well aware of the significance of the event.
“We’re just building up a bunch of hype heading in,” he added.
There will be 12 teams coming to provincials at PBHS, Vande Griend said.
“Each of the zones will be represented in the province.”
Thursday marks the first round of games to kick off after opening ceremonies scheduled for 9:15 a.m. and the first game will start at 11 a.m.
Basketball, according to Coach Bramfield, is a huge part of the culture at PBHS and the community too.
Bramfield said the team is a broad mix of girls and they are hard working and want to compete.
“They want to win. They work really well together. They’re friends, both on and off the court,” Bramfield noted.
Cassidy Morland, one of the players on the 2A Girls basketball team said, she’s excited about PBHS hosting this year’s provincials. Morland has played basketball since Grade 7 and she believes the team is doing well.
“We’re doing pretty good and we’ve improved since the beginning of the season,” she added.
Brooklyn Vogel, another player, said she believes the upcoming provincials are pretty exciting. “We’ll do well as a team,” Vogel said, adding she has played basketball since Grade 6. “We’ve improved a lot and we work really well together, especially with our new coaches this year,” Vogel noted.
Another player, Amanda Johnson, said the team is doing very well this season and it’s exciting the provincials are being held in her hometown. The team has really reached its potential this season, said player Shaylin Vogel. “And, we’re finally peaking.”
“I think we’ll do very well,” she said, adding she is proud of all the girls this year. “And, how much we’ve improved and grown as a team. This should be a good end to the season.”