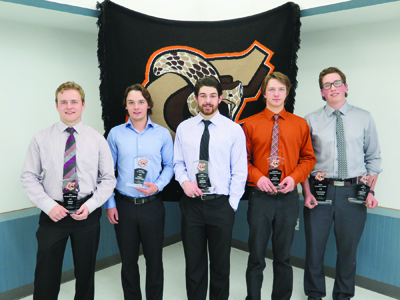 The Coaldale Copperheads held the organization’s year-end awards. The following are winners from the event. (Left to right) Top Defensive-Forward Craig Lyon, Rookie of the Year Brady Parenteau, Top Defenseman Austin Huculak, Hardest Worker Calvin Swanson, MVP and Top Goal Scorer Connor Gross and Most Improved (missing in photo) Clay Vogt. (Right top) Craig Lyon took home a few awards during the evening including the Copperheads Presidential Award, which has only been awarded two times in nine years to a player. Lyon was recognized for his off-ice dedication to helping others in the community — as he volunteered to transport one fan, in particular, to home games plus a few other extra volunteer tasks. Lyon was also awarded as the current “Top All-Time Copperheads” leading goal scorer, assists, and points in history.