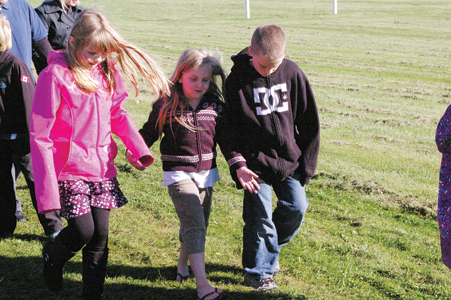 Soccer fans don’t miss the first annual Kennady Candy Cup July 9. The Coaldale Thunder/Tempest Football Club is proud to present this one-day soccer festival for U-10 and U-12 boys and girls in honour of Kennady Clarke at the Quads Sports Fields in Coaldale. Two years ago, 10-year-old Kennady Clarke passed away in Edmonton. She loved soccer and also loved candy and the Kennady Candy Cup is dedicated to a day of sweet treats, soccer and will coincide with the Coaldale Settler Days Candy Parade. This year’s theme will be team names chosen for favourite candy.
Organizers noted the format for the soccer games will be 3v3 with teams of 4-6 players and 10 minutes per half. The Kennady Clarke Candy Cup kicks off after Coaldale’s Candy Parade. Game schedules will be released June 30. Sponsorships are also appreciated for $200. “It’s actually a soccer festival. It’s not going to be a tournament. It’s a festival or summer fun day. It’s for U-10 and U-12 boys and girls,” noted Danny Clarke, one of the organizers of the event. Clarke said the first-time event runs 1-8 p.m. “We are expecting about 24 teams out there. We’d love to see more,” he added.
Tony Tams, from the soccer program, said the Kennady Candy Cup is named after the Coaldale Thunder president’s daughter who passed away from an asthma attack. Kennady was a student at St. Joseph’s School and the school has held an Asthma Walk in memory of the student. “It’s just a fun festival-type atmosphere. We’ve got a dunk tank planned. Kids will get a chance to kick a soccer ball at the dunk tank and dunk certain members and coaching staff. Just a lot of different fun events planned for the kids and a lot of candy involved,” Tams said. For more information contact Danny at 403-915-6195 or e-mail info@coaldalethunder.ca.