An archer in Ireland 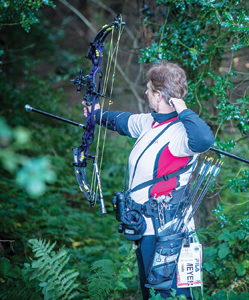 Picture Butte’s Ann Neumeyer was recently in Dublin, Ireland from Sept. 24 to Oct. 3 participating in the World Archery Field Championships.
“I came 33rd out of 36, which doesn’t sound very good. But, it was awesome,” joked the local archer.
Field archery, Ann explained, is when archers shoot at paper targets on target busts out in the woods. Neumeyer added there were 35 countries represented and over 350 archers.
“We’re shooting with the top in the world. That’s where we found out Canada is a very small fish in a really big ocean because there’s nothing we have in Canada that comes close to what the challenge and the courses we shot over there,” she noted.
Neumeyer said archers in the competition shoot one unmarked round — unmarked distances from 15-55 metres. And on the second day and during the second round archers shoot a marked round, which is from 20-60 metres.
“There’s a big difference between a marked and an unmarked round. It doesn’t sound like a lot, but the difference in knowing the distances is one less challenge you have to worry about when you’re shooting,” she said.
In Canada, Ann said, archers never get to shoot an unmarked round.
“That was an interesting experience having the first time at world championships and shooting an unmarked round of field target.”
Ann noted the biggest part of her training leading up to the event was mental preparation.
“We shoot a thing here in Canada called 3-D or three-dimensional foam/rubber targets we shoot at. It sort of helps you prepare, but we still don’t have the challenge because in 3-D archery we only shoot one arrow per target. At field you shoot three arrows per target. You get an accumulative score each target and then an accumulative score over the whole thing. You shoot 24 targets in a round,” she said.
According to Neumeyer, the big difference was when shooting in Ireland, archers never got to stand on level ground.
“We did a lot of shooting at different angles up and down. That adds another degree of difficulty.”
To make the national team, Ann said, is pretty cool because not everybody who applies makes the team.
“Once you make the national team and then you get to go, it’s a pretty amazing experience. It’s the first time since 1988, the Canadians have sent a team to World Archery Field Championships,” she said.
Neumeyer said the top Canadian woman is a very experienced target archer and finished 27th.
“I finished 33rd, so I figured I did pretty well. Because I finished 33rd after the first day of the unmarked round, the next day we had to shoot and we still have to try and maintain that. You could go up or down. I didn’t go up but I didn’t go down. That was a big goal. Once I had established my placing the first day, the goal was to keep that placing or do better. I kept it at least,” Anne said.
Mental prep, according to Neumeyer, is key because an archer needs to keep in their mind what the goal is and what they want to do for the day and then work towards achieving it.
To make the national team, Ann explained, an archer needs to attend the provincial and national field championships for two years prior to the world event.
“And have scores to hand into the people who decide who gets to go,” she said, adding results are compared to other scores across the country and the national team is picked.
In 2017, Neumeyer is going to the World Master Games in April in Auckland, New Zealand.
“Once you make the team, the whole world opens up of opportunities,” she noted.
But, she added, that event will most likely be her last. She said the Canadian national team asked if team members would be interested in going to the next world championship in two years.
“I’m still not sure if I want to go again. I would love to but the competitors are quite a lot younger than what I am and that makes a big difference. The two girls I shot with the first day were the top two women in the world currently. One was 23 and one was 31 and I’m 55.”
“It was kind of interesting because they were the ones teaching me how to do things. In Canada, we don’t have that level of competition. Even when we attend our provincials and nationals, the challenge isn’t as much as it is in Europe. In Europe, field archery is really a big sport,” she said.
For training and prep for the upcoming event in the New Year, Neumeyer said the biggest thing she did last year and what she’s going to do this year is just shoot target archery as much as possible.
“The focus is the same for target, as it is for field — 3-D is a little different because you’re actually shooting at a three-dimensional target versus a paper target. For me, target archery is where I’m going to get my practice,” she said.