Back in the saddle at LTRA 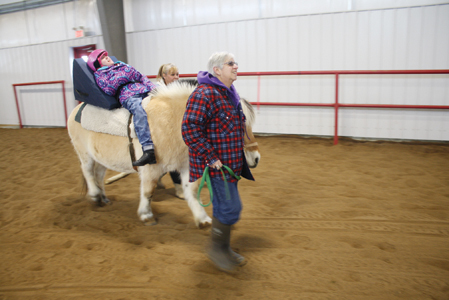 Tony Deys is the Lethbridge Therapeutic Riding Association’s (LTRA) new executive director. He’s been behind the desk of the Lethbridge County-based facility for just a few weeks.
“Overseeing everything that has to do with the farm, fundraising — organizing golf tournaments, the Joanne Perlich Ride For Dreams, and a couple of other fundraisers we have to organize, along with the board of directors, we have eight of them,” Deys noted.
“It’s a team effort because there’s so much to do, with such a small staff,” he added. Deys said staff-wise there’s three and a half — a farm co-ordinator, a program co-ordinator, and a part-time office person. But, of course there’s the volunteers.
“We have a bunch of great volunteers. Obviously, we couldn’t do it without the volunteers,” he said.
Deys said the volunteers are invaluable to the organization and volunteers come out to the facility week after week and walk horses and make sure everything is where it needs to be.
“They are really special people,” Deys said.
According to Deys, the LTRA is just past the one-year anniversary with the new arena — the old arena’s roof caved in.
“We were a year without any programs or anything like that. I think we’re kind of back to where we were before, as far as programs and clients. The arena is fantastic, it’s wider and longer than the old one. It’s a great venue for people to come out and take a ride during the minus 40 temperatures, if they so desire,” he said.
There’s not a lot of changes, Deys pointed out, it’s just streamlining everything and getting funding up and running.
“We receive no government assistance. Our operating budget is around $200,000 every year. We rely on volunteers and fundraising to maintain what we have. Would we like to see more? Absolutely. There’s a couple of programs, I think going forward, we would like to see — obviously the mentally-challenged, the physically-challenged — those are the programs we don’t want to see fall through the cracks with the therapy, with the physical therapy and just with the connection they have to the horses,” Deys noted.
Deys said there are some untapped programs the LTRA might want to get into in the future.
“Including PTSD, not only for the veterans or for law enforcement, but also for a lot of the immigrants and refugees coming in, the younger ones who have grown up with war and refugee camps and moving half way around the world to a country that is totally unfamiliar with them and having seen some of the things they’ve seen in their short lives, many of them have lost one or two parents, brothers, sisters, aunts, uncles in wars and things like that. We kind of forget them and the things they’ve gone through. I know a lot of them, I think, might be helped with programs like this when they come out and see a horse and ride a horse,” said Deys.
Eilish Short, the facility’s program co-ordinator, said programs include an elementary group from Coalhurst for therapeutic riding with different disabilities ranging from autism to cerebral palsy.
“They would get different things out of our programming. The cerebral palsy would mostly get stretching and then for autism social interaction and following tasks are beneficial,” she said.
Programs include driving with a wheelchair accessible wagon, but mostly it’s just the therapeutic riding classes and each class is different, depending on the disability in the class, Short explained.
“We would cater to the programming we do for each class,” she added.
Animal therapy, she said, is very beneficial for individuals utilizing the facility, but LTRA horses provide great physical benefit for clients.
“Our horse’s pelvis is shaped the same as a human’s, so anybody sitting on a horse for an hour, gets the same benefit to their body as it would be if they were walking,” she said.
An Easter camp is scheduled for this spring, Short said. “Our Easter camp, we run all week.”
Participants will learn brushing and caring for the horse to basic skills of riding up to walk/trot. There will also be a summer camp. Short said a golf tournament is also scheduled for June.
Short said the LTRA features therapeutic programs for those with special needs and programming for able-body riders.
Deys, who has worked in the media industry for years, added it was probably the hardest thing he’s ever done — leaving the media business.
“It’s the only career I’ve known, both at CTV as the sports director, and the past 15 years at Country 95. But, I’d always said when it started feeling like a job, it was time to go. And the past year really felt like a job. And sometimes you just get to the point where you want to do some good — something tangible, to help a group, or champion a cause.
Deys noted the LTRA allows him to do both.
“It’s a fantastic place to work, with an awesome board, some great employees and most importantly, those who use our horses for therapy. When I’m having a rough day, or feeling a bit down, all I have to do is walk to the barn, pet the horses, and take a look at those who use our facility. It’s as therapeutic for me as it is for them,” Deys said.