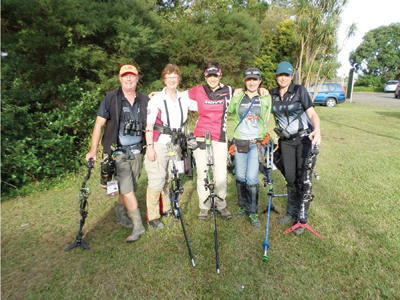 Anne Neumeyer, a local Picture Butte archer, competed in the World Masters Games in Auckland, New Zealand from Apr. 21-30.
“I am so happy with the results of my shooting at this level. We practice, train and spend hours working on mental preparation for high level competition. It is so satisfying to be able to move from provincial, national and finally to put yourself and your skills out there in international competition. Then to come home with these results is just a fantastic validation of our competitive skill and preparation. I thank my coach, family and community for their unfailing support,” Neumeyer said in an e-mail to the Sunny South News.
According to Neumeyer, practice days were April 21 and 22 and it was practice at the Outdoor/Field Course Range. Competition days were April 23, 24, and 27.
First Round — 28 targets — International Field Target Archery Round
* Archers shoot four arrows per target. Total score per target is 20, total possible points for the round is 560.
* Distances vary from 10 feet to 80 yards.
* Challenging uphill and downhill angle shots, fan shots and walk-ups, light to dark shots.
* First time shooting the IFAA round, shot a personal best score and placed fifth.
* Finished behind three multiple world champions in IFAA — Linda Lainchbury, Lucy Holderness and Alannah Dunaway.
April 24 — Second competition day
World Archery 720 Target Round for Qualification — finished seventh.
* Made it to the elimination rounds. Went to the quarter finals and lost out to an American shooter Alannah Dunaway, World Champion in Field and Target.
* Earned a fifth place finish.
April 27 — Third Competition Day
World Archery Field Target Round — 24 targets
* Archers shoot three arrows per target for a possible score of 18, total possible points for the round is 432.
* Distances from 10 metres to 60 metres.
* Challenging uphill and downhill angle shots, light to dark shots.
* Second time shooting the WA Field Round, shot a personal best score and placed fourth, beating one of the ladies — a multiple time World Champion and sponsored shooter.
* Many of the competitors were sponsored shooters. The largest group of competitors in archery at WMG was the men’s and women’s 50–59 age group.
* There were 28,000 athletes participating in 28 different sports — 45 per cent of the athletes were female.
* Fantastic opening ceremonies.
* Focus on the sports not countries.
Neumeyer noted there were six other archers from Canada participating in the Archery Competition, representing Canada. “It was an amazing experience, even better than going to Ireland in September. This competition was a more accurate test of my abilities, as I was competing with people closer to my age category,” she said.
“It was an honour to represent Canada once again at international competition. My goal for the competition was to shoot my best and represent my sport and country with pride,” she added.