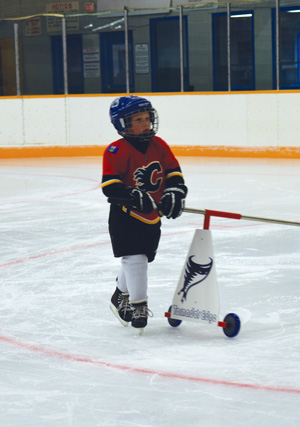 Coaldale hockey players have a new tool to help them skate better.

The Coaldale Minor Hockey League Association has partnered with Tornado’s Edge and the Calgary Flames Association to improve their players’ confidence on ice and teach them how to do crossovers. CMHA is one of the minor hockey associations testing out Tornado’s Edge cross-over training tool in a pilot program. The trainer arrived at the Coaldale Hockey arena on Wednesday, Sept. 13.

“It’s a cross-over, an edge trainer, that allows kids to learn with confidence and repeating muscle memory so that they can be able t do some of these drills on their own after,” said Gerard Beaulieu, co-founder of Tornado’s Edge.

“You’re putting two pieces of metal on their feet, and telling them to take one of your skates and put it over top of your other foot. It’s not exactly the easiest thing to do, especially with these young kids.”

Beaulieu says that it can be hard, especially for younger kids, to learn how to do crossovers. But what the trainer does is anchor a series of poles in a circle, which allows someone to hang onto them and skate around and practice maneuvers such as crossovers while keeping their balance.

“In traditional methods, what would happen is that they would learn crossovers simply by trial and error,” said Beaulieu. “What you will see is the kids will be able to do crossovers with the assistance of the trainer, so they learn what that motion looks like, gain confidence and gain muscle memory of knowing what that looks like. It also allows the coach to correct any bad movements or improve their movements so they enhance the quality of the crossover.”

The crossover trainer came around a year ago, when Derek Fortier, Tornado’s Edge co-founder, was trying to prop his autistic child up while he learned to do crossovers in hockey. Fortier at the time was supporting him with a hockey stick, and thought that there had to be a better way. In August 2016, Fortier and Beaulieu developed a prototype of the crossover trainer, and saw right away how useful it was with teaching children how to do crossovers.

“We had that was on their, shooting five or six years old, and she was on the trainer for 10 minutes, and after 10 minutes, Derek (Fortier) got her to go on the circle without the trainer, and her parents were amazed she was doing a crossover. Typically, maybe 10-20 per cent of the initiations, timbits, five to six year old, can do a crossover, and even less can do it in both directions. In fact, a lot of kids have problems doing it in both directions,” said Beaulieu, adding that he still had troubles doing them both ways.

“Crossovers are particularly difficult, because they have to learn balance, they have to trust and they have to shift edges,” said Brent Llyod, treasurer of the CMHA,.

“You either shift edges and you’re successful, or you fall, so this takes away the falling component and the fear component for children, so they can learn assisted initially, and then they graduated to the unassisted.”

The trainer could be adjusted for anyone from five years of age to adults. However, right now Tornado’s Edge is focusing on younger kids.

When Llyod heard about the trainer, he became interested in it, and he got into talks with Fortier and Beaulieu over the summer.

During that time, the Calgary Flames Foundation partnered with the company, and offered to subsidize the price of the trainers. Fortier and Beaulieu offered the rebate to Llyod, in exchange for feedback, on things such as how easily it can be incorporated into practice and set-up as well as the players’ progress over the hockey season.

“We’ve been waiting to come down here for a while because Brent (Llyod) is so passionate about using the unit,” said Beaulieu.

“We really gravitate towards those individuals because, we can see how they can take it and  actually bring the device to do things that we may have never thought of or bring it to the next level.”

CMHL is the only hockey association outside of Calgary to be participating in the pilot project. The Coaldale trip was also the first time that Beaulieu and Fortier could see the pilot program in action. In addition to the subsidized funding, Llyod said that Lethbridge County had also contributed funding towards the trainer.

“I think the brilliance of it is in the simplicity of the design. Coaches can set it up quickly and they can take it down quickly, Kids love it, it’s an attraction, so it becomes now something they want to do, and as a coach, that’s invaluable.”