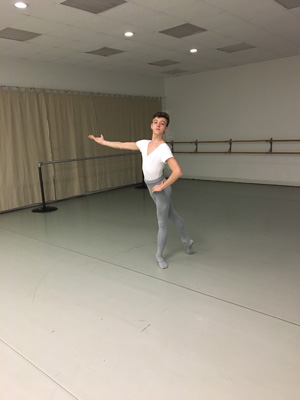 A Coaldale dancer has been given the opportunity to attend the prestigious School of Alberta Ballet.

Parker Sakamoto, 16 years old, started at the ballet school in September, and will be attending for the rest of the school year. He has been dancing since he was five years old, and credits his love of it by being inspired by a Stomp show.

“I went to a Stomp show, and I thought that was cool in how they were making noise with different things, and I was like, ‘Well, that seems pretty cool’,” said Sakamoto. “I started doing tap, and then in order to do competition for tap, I had to take a ballet class. So that was the only way I could do competition, and I ended up growing a love for ballet doing that.”

Taking classes and studying dance at the local studio Dance Images, over the years Sakamoto has taken different classes in lyrical, tap, jazz and of course, ballet.

Sakamoto’s ballet teacher, Britney Van Raalte, encouraged him to try out for the  School of Alberta Ballet’s summer program this year, for which he successfully auditioned for.

“It was an experience. It was my first time living away from home,” said Sakamoto of the three-week program. “We did dance for like 90 per cent of the day, and then 10 per cent of the day we came home, and they had all these activities and stuff that we can do, and then you just kind of went to your dorm and hung out for a while, and then they had roll call, then you went to bed and woke up and did it all over again.

“It was different, it was nice. I loved it.”

“I was nervous, and excited, at the same tie. My ballet teacher was absolutely ecstatic, and so was my whole family, and everybody supported the idea and was really happy.”

Sakamoto began the program on Sept. 5. Noting that as it was a private school, the academic part of the school was “much harder” then his previous high school, but he found it helped him improve academically, physically and mentally.

The dance classes themselves are also quite intense. While he attends four and a half hours of academic classes a day, he spends five hours in dance classes each day, with his ballet class in the morning going for three hours.

Although admitting he is exhausted after each day, Sakamoto said the camaraderie at the school was amazing.

“Everybody supports each other. Its an amazing, good community, and everybody,” said Sakamoto. “It’s a shared love, everybody has a shared goal, to make it be something.

In the future, Sakamoto hopes to dance in the Alberta Ballet company. Although he is currently in the professional division

“For people who are questioning whether they should take that chance, take that opportunity — because I was hesitant to take that opportunity at first. They’re like, ‘Well, you’ve bee accepted”, and I remember sitting there thinking, ‘Well, what do I do?’ I had a couple of weeks to decide, and I thought about it everyday for those couple of weeks. My advice to anybody that’s questioning whether they should take that step, to take that next step; do it. Because you don’t want to do anything that you’re going to regret, just do it.”

The School of Alberta Ballet is the training centre of Alberta Ballet, located in Calgary. The school aims to give each student the necessary dance, life and academic skills to start a professional dance career.

The Professional Division, which teaches students grades 7-12, is designed to prepare students for a career in dance. Admission to the School of Alberta Ballet’s Professional Division is solely based on a student’s talent, with successful candidates being chosen through our Summer Intensive, via the annual International Audition Tour.