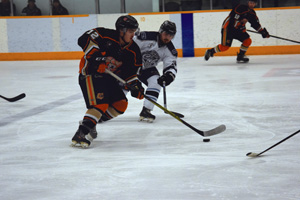 The Coaldale Copperheads had to go to Game 7 overtime to earn a birth in the South Division final of the Heritage Junior Hockey League.

Game 5 was at the Snake Pit in Coaldale Wednesday night with the Copperheads up 3 games to 1 and the opportunity to secure the series.

The Cubs tallied first early in the first frame with Ty Abbott of the Copperheads tying it midway through the period. The second period started quickly for the Copperheads and were up 3-1 with goals by Linden Gouw and Turner Sharp. Cubs rallied in the last half of the second to tie it with their third goal coming with 20 seconds left in the period.

The third period started quickly for the Hat as they jumped ahead with two goals. Ty Anderson scored midway through the third to come within one but the Cubs scored an empty netter to secure the win and send the series back to Med Hat for Game 6. Copperheads were out shot 38-31.

Game 6 in Medicine Hat started with the Cubs short handed 4 minutes in but took advantage of a hard forecheck on an iced puck to score a short handed goal.

Copperheads replied twice with goals from Levi Anderson and Tyler Strath to end the period.  It was a strong second period for Med Hat with four unanswered goals. Snakes outshot the Cubs but were unable to put one past the netminder for a eventual 5-3 loss to the Cubs forcing Game 7. Shot were 46-23 in favor of the Copperheads.

The Snake Pit was rockin’ Saturday night as both Coaldale and Medicine Hat Fans filled the stands. Brandon Howg opened the scoring for the Copperheads on a great individual effort early in the first period.

The Cubs replied 5 minutes later to tie it. Copperheads came on strong to put two more into the twine, Jared Bainbridge and Jayden Smith scoring for Coaldale. The second period went scoreless until 5 seconds left when the cubs inched closer with their 2nd of the game.

The third period was a hard fought affair, with numerous chances from both teams but the Hat tied it with 6 and half minutes left in regulation play.

Copperheads will have home advantage in the south division final as finished first in regular season.

Their opponent, the Cochrane Generals, finished third, only four points behind the Snakes.

Same admission prices will be in effect- Adults $10 and Youth $5.