Weekend of goals and penalties for the Copperheads 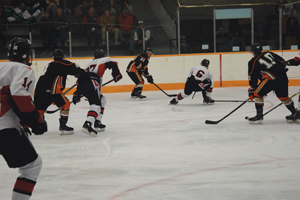 This past weekend the Coaldale Copperheads had a magnitude of goals and penalties minutes in two games.

Saturday night they hosted the past years champion Airdrie Thunder to the Snake Pit. Copperheads started slow allowing a three goal start for the Thunder. With three minutes left in the period Dallas Bodnar earned his first HJHL career goal for the Snakes.

It was short lived as Airdrie scored with twenty seconds left in the first period. Even though down 4-1 they started the second period full force scoring three unanswered goals.

Newcomer to the lineup Isaac Benoit started the trend scoring, then Jayden Bexte and Jedd Horvath each collected hard working goals. End of the second period score was 5-4 in favour of Airdrie. Benoit unassisted with a end to end type goal twenty one seconds into the period which tied the game.

Snakes captain Tyler Anderson capitalized on a goal which put them ahead for the first time of the game.

It was a flurry of goals three more from the Thunder plus an empty net at the end of the game. Anderson scores his second in the middle of the mix but the Copperheads fell 9-7. Overall shots were 43-29 for the Thunder. Goaltender Broc Merkl started and played the first twenty with Brandon Clark filling in the remaining forty. Snakes had 32 penalty minutes vs Thunder 19.

Sunday the team travelled to Medicine Hat. It ended up being the Cubs home opener with the snow fall cancellation games from the prior weekend.

It was a perfect situation for the orange and black two teams since they are super competitive against each other.

It set the tone without a doubt.

Copperheads stayed on track for the most part the entire game except for a a break in the game mid way through the second.

With an injury high hit to the face upon one of the Copperheads players, it sent Cubs Straub to the dressing room unescorted off the ice.

Things happen quickly in the love of a hockey game, fans then witnessed Straub and Copperheads goaltender Merkl wrestling at the exit gate area. It was a chain of events and a ton of penalties sending the Snakes goalie to the dressing room. Pretty certain losing your goaltender in this fashion is a new Copperheads record too.

Prior to all this the score was 2-0 with Mason Sande gaining his first career HJHL goal. Goalie Brandon Clark filled in for Merkl for the remaining half of the game and excelled.

Brandyn Howg with a strong show-casing game scored two more goals and Bexte a single. Final score ended up with 5-1 in favour of the Copperheads taking two league points from the Cubs with 110 combined penalty minutes.

In addition, fans are encouraged to bring non-perishable items for the Coaldale Food Bank since the last collection was so very successful.