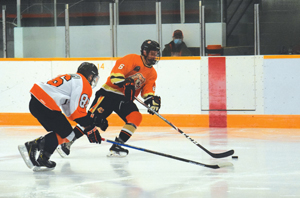 With the calendar flipped to December,  Coaldale Cobra teams continued their Central Alberta Hockey League seasons this past weekend.

The U11 Tier 3 Cobras had a single game on tap this past weekend when they travelled to Foremost for a game against Bow Island/Foremost.

The Cobras would win  after securing six goals and only allowing three.

Nova Mulder had a hat trick, Travis Jackson had a goal and an assist, and Rudy Wojszel and Alistair Poettcker each had a single goal. Elliott Hass faced 20 shots in the win.

In a single game on the weekend, the U11 Tier 6 Cobras skated to a 9-5 loss on Saturday against Strathmore.

On the road, the Cobras saw Jackson Batkin collect a hat trick, while Ryan Scriven-Hirsche and Dylan Yackulic had singles. Mira Anderson faced 36 shots between the pipes.

On Sunday morning, the U13 Cobras welcomed in Claresholm for their only game on the weekend.

In a big offensive showing, the Cobras would skate to a 9-7 win. Beckett Hurt had two goals and an assist, Ryley Kauenhowen had a goal and two assists, Ryker Orsten had a pair of goals, Caleb Burton had a goal and an assist, Nicole Dobrocane, Ace Pezderic, and Gracey Palaschak had a single goal each, and Tucker Newberry and Kaden Pauls each had one assist. Brant L’Hirondelle was busy in net as he faced 46 shots in the win.

With an offensive explosion, the U15 Cobras dominated in their lone game this weekend when they cruised to a 14-4 win in Lethbridge.

Gage Lyckman had the hot stick as he found the back of the net five times, while Jonah Hass had a hat trick, Grady Knoblich had a goal and an assist, and Dalton Damen had a pair of goals, and Layne Kyle, Lane Broderson, and Killian Erick had a single goal each. Carsen Roy, Ryder Bousfield, and Kenneth Galbraith had a pair of assists, and Kaede Wakefield had a single assist. Dakota Hurt saw 21 shots in the win.

The U15 Cobras have the upcoming weekend off and see their next games on Dec. 18 and Dec. 19.

The U18 Cobras lost a pair of close games this past weekend.

On Friday, the team travelled to Nanton which resulted in a 4-3 loss on the road. Kevin Erick potted two goals for the Cobras, Hector Peralta Lopez had a goal and an assist, while Nolan Klassen, Ryden Yackulic, and Tyler Wiebe had a single assist.

Ty Befus saw 28 shots fired his way between the pipes.

The team returned home on Saturday evening ad once again saw a close game. After a good defensive showing, the Cobras would fall 2-1 against Rockyford.

Kaiden Dame had the lone goal with Peralta-Lopez and Yackulic drawing assists. Brenden Duda saw 62 shots in net for the Cobras.

Like the other Cobra teams, the U18s have the weekend off before returning on Dec. 18 and Dec. 19.