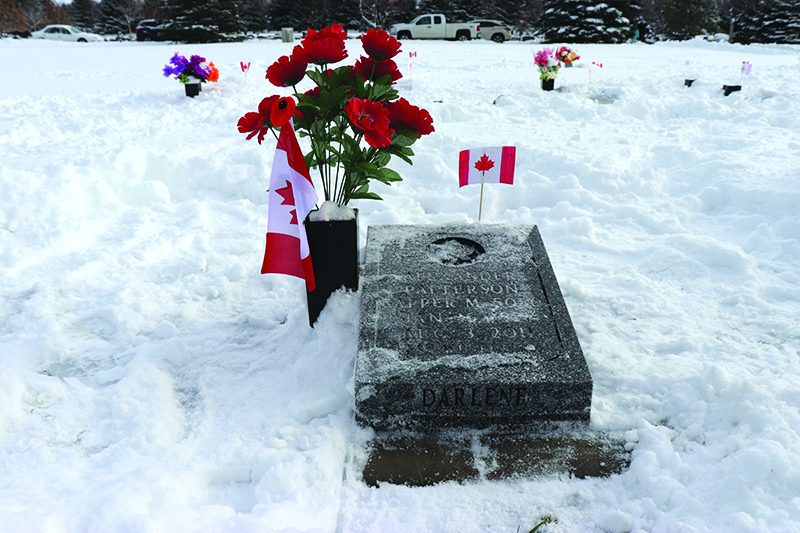 Despite COVID-19, Remembrance Day remains essential to all Canadians.

Remembrance Day looks a little different in southern Alberta this year due to COVID-19, but veterans who have served and who are serving were still honoured for their sacrifices.

Canadian veteran Alexander Patterson served in the Second World War, where he enlisted at 17, lying about his age to fight and protect and serve his country.

As a teenager, he served with a regiment in the Netherlands, Italy and Germany and was a heavy equipment operator. His responsibilities included marking all the roads for his troops to get around.

Alexander Patterson was born in Blairmore, Alta. on Jan. 16, 1921, to Margaret and Jack Patterson. He passed away at age 90 in Lethbridge. His wife passed away in 2008.

Patterson had been discharged on Sept. 9, 1946, where he had come home to Blairmore with his wife Darlene Anderson and his son Rick Patterson who had only been four years old when his father had come back from the war.

Patterson served for seven years, and during that time he received a volunteer medal and clasp.

Remembrance Day is important for all generations so that they have a better understanding of the history that led them into the free country we have today.

Rick Patterson remembers to never forget the veterans who had fought alongside his father Alex on Remembrance Day, even though COVID-19 is still a major concern for Canadians that might distract them from remembering the fallen.

“My dad fought hard every day and he always told me stories that had been, such a terrible thing to hear from my father, but it needs to be told,” said Rick Patterson.

Patterson’s son Michael Patterson always had an interest in the history of war and wanted to ask the right questions of his grandfather before he passed away.

“Grandpa Alex was a hero through and through and he will always be remembered on Remembrance Day,” said Michael Patterson.

Michael Patterson always makes time for Remembrance Day each year and never forgets about his deceased grandfather. Patterson had a motto where he said to each of his family members, “always look forward in life and never forget the memories you make along the way.”

“I never got a chance to say goodbye to you. You were a huge influence in my life and say hi to grandma for me,” said Michael Patterson.

Although COVID-19 has changed plans for many Remembrance Day ceremonies across the country, this year is extra significant. It marks the 76th anniversary of the Netherlands’ liberation and the end of the Second World War.

COVID-19 has had a significant impact in many countries and during Remembrance Day, many have had to take proper safety precautions due to the fourth wave of COVID-19.

Due to COVID-19, many communities around southern Alberta won’t be able to host a large ceremony like in past years, with residents gathering together at the cenotaph outside City Hall to honour many of the fallen and all who are still in the Canadian Armed Forces.