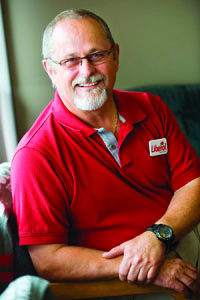 Lethbridge Herald photo by Ian Martens Mike Pyne is the candidate for the Liberal Party for the Lethbridge riding in the upcoming federal election.

After more than 30 years in positions of leadership, Lethbridge resident Mike Pyne is aiming at becoming the city’s next Member of Parliament.
Pyne, first elected as a school trustee in 1982, has also served as chamber of commerce president in Taber, as a member of the Oldman River Regional Planning Commission, and as an Alberta researcher for the Royal Commission on Aboriginal Affairs.
Now, he’s working to apply that experience at the federal level, as one of what he expects will be a number of successful Liberal candidates across the province.
“Things are so fluid right now,” he said, with so many voters hoping to defeat the Stephen Harper administration.
“Anything can happen.”
Lethbridge, he said, has been targeted as one of the Liberals’ most likely wins since, among other factors, there is no incumbent Conservative MP.
“When I’m door-knocking, people tell me it’s time for a change,” Pyne said.
“There are a lot more Liberals here than I thought there were,” he added.
Leader Justin Trudeau’s job-creation plan to help cities restore vital infrastructure and build affordable housing has sparked Canadians’ interest, he noted.
But Pyne said despite the Conservatives’ promises over the years, many Alberta voters’ greatest concerns are their stagnant incomes, their uncertain job prospects and their growing difficulty in providing for the necessities.
“We have young families worrying about how they’re going to make it,” while the Conservatives are giving Canada’s best-paid executives more tax breaks.
“Our whole program is all about fairness,” Pyne explained.
Members of First Nations deserve that, too, he said. He believes a Liberal government will work to create the “nation to nation” relationship former prime minister Paul Martin outlined in the Kelowna Accord — only to see it cancelled by Stephen Harper.
“Harper has lost a lot of his credibility,” even in a city that’s voted Conservative for years.
“That’s something we’re hearing a lot at the doorstep.”
People are also disgusted by the Conservatives’ constant campaign of ridicule against Trudeau, he added.
“We won’t use personal attacks,” Pyne said. “But we will question the Conservatives’ ‘facts’.”
Those “facts,” he pointed out, include the Conservatives’ claims valuable research papers were all captured digitally before they ordered the library destroyed at the Lethbridge Research Station.
“It is absolutely devastating what the government has done,” Pyne said, and it shows Harper’s distrust of science and scientists.
“Canada should have science-based policy, not policy-based science.”
Pyne is the Lethbridge riding Liberal candidate, which includes Lethbridge County.