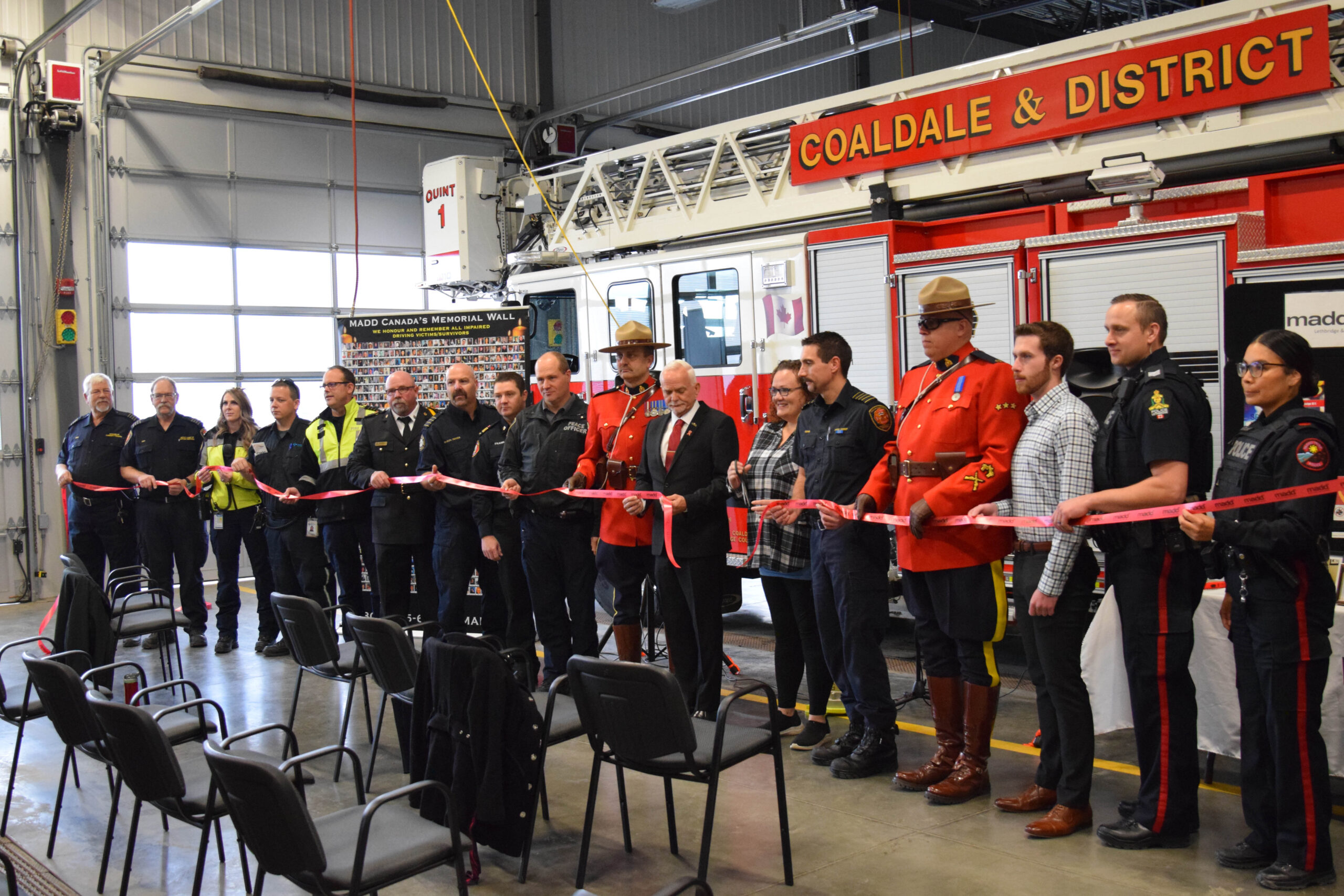 The annual red ribbon campaign kicked off this year at the Coaldale Fire Station and runs from Nov. 1 to Jan. 2. During this time, MADD Canada chapters partner with community leaders to hand out red ribbons, and car decals, as part of the public awareness campaign toward eliminating occurrences of impaired driving, for good. The ribbons have become a recognizable symbol to victims and those impacted by impaired driving.

The event brought together volunteers, community leaders, and survivors to share their personal stories on the ways they have been profoundly impacted by impaired drivers.  President of the MADD Lethbridge & Area chapter, Anita Huchala tearfully read a speech on behalf of Barnaby Provost’s oldest daughter, Tess, who lost her father five years ago when she was just 12, to an impaired driver.

“My dad was everything to me; he loved me like any dad should. Every night, every morning, every time he saw me he told me how much he loved me. He did that for all my siblings because he wanted us to know how much he loved all of us. Which hurts the most because we loved him just as much.”

“To this day, I keep his teachings and lessons with me. There were times when I wanted to give up, but I think about my dad and remind myself wanted me to keep pushing.”

Traffic Sgt. Daniel Lomness, of the Lethbridge Police services (LPS), and said the LPS will be conducting more frequent check stops in the city in the coming weeks.

“Lethbridge police are dedicated to keeping road users safe, by moving impaired drivers off the road.”

In 2021, the LPS charged or issued sanctions to 272 drivers, a figure traffic Sgt. Daniel Lomness, said is coming down. “So far in 2022, we’ve issued or charged 180 drivers. As that number is coming down I think some people are making more responsible decision, but we definitely still have some work to do.” So far in 2022, there have been 37 collisions in Lethbridge where alcohol and/or drugs has been a factor.

“You always have a choice; there is always an alternative way home,” said Traffic Sgt. Lomness.

Coaldale’s municipal enforcement, alongside the RCMP will be conducting the second annual Candy Cane check stop in Coaldale, in partnership with MADD as another educational component to spreading the message that, “impaired driving is totally avoidable. It’s a choice that one makes to drive impaired that can lead to fatalities, injuries, and have lasting effects on families and survivors,” said Coaldale’s Fire Chief Kevin McKeown.

Red Ribbons and car decals are available across the city, or the Lethbridge Police Detachment. For more information on MADD, visit, MADD.ca.